The trouble with Linux is its sheer variety.

For any 'newcomer' this is blatantly confusing.

I will try here to clear the views by separating the myths from the facts ...

If you are interested then the following link leads you to a page of facts with statisticss about Linux ...

The most hilarious thing if wannabe-experts talk about 'Linux' is using the term 'market'. 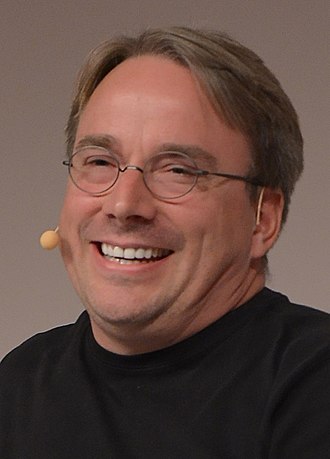 About 1990 Linus Torvalds realized (as a computer-science student at the University of Helsinki/Finland) that the INTEL "286" microprocessor series (16 bit; end of the '80ies) had the abilities that could so far only be found in special and highly expensive medium data technics processors in these days.

Going from here Linus Torvalds started to implement a UNIX-compliant system core (kernel) for the line of INTEL microprocessors ...

When Linux Torvalds was a computer-science student he was pretty unhappy with MINIX (mini-UNIX) which was a UNIX implementation provided by the computer-science professor Andrew S. Tanenbaum (University Amsterdam, The Netherlands) through a restrictive licencing scheme 'for educational purpose only'.

After some unfruitful arguments with professor Tanenbaum Linus Torvalds decided:

"I roll my own ... will call it Linux ... and it will be free to anyone without any restrictions"

Once the decision was made Linux Torvalds started ~1990 to implement an operating system core (kernel) aiming towards  the professional UNIX-philosophy and published his results in the computer-science area. At first there were about 100 people who found this interresting. But this number quickly grew to some 10 thousands of computer scientists that followed this projects. In 1991 the initial release of Linux came to life ...

Linux itself does not provide any applications, programs or graphical desktops. So speaking of "Linux vs. Windows" is a blatant nonsense.

Linux kernels can be found nowadays in many devices from tiny to giant. For instance ANDROID on smart-phones is driven by a Linux-Kernel embedded into the ANDROID-Organisation and surrounded by the 'Apps' for the ANDROID system.

Such a compilation of:

is called a 'distribution'.

What is a distribution?

What can be seen as  a "Linux" nowadays is the so-called 'distribution' which is a Linux kernel surrounded by a huge bunch of applications, supporting data and the distributor's organization.
There are over 55 thousands of applications, tools, libraries and other supporting packages in a usual Linux distribution of which about 1200-1500 packages will be installed in a usual installation.

So what you can get is a Linux 'distribution':

What all these Linux distributions have in common is the 'Linux Kernel' (operating system core) and the fact that they follow the UNIX philosophy.

UNIX is nothing that you can buy or is owned by a company.

UNIX was initiated  ~1970 by Ken Thompson, Dennis Richie & others at 'Bell Labs research center'. Later AT&T started out imprinting UNIX as a catalog of defined standards on operating system functionality and was initiated by the 'X/open consortium' (https://en.wikipedia.org/wiki/X/Open) in 1984 and is continued nowadays by 'The open group' (https://www.opengroup.org).

Many hardware vendors have adopted UNIX as a true industry standard (norm) to implement operating systems for their own hardware platforms. 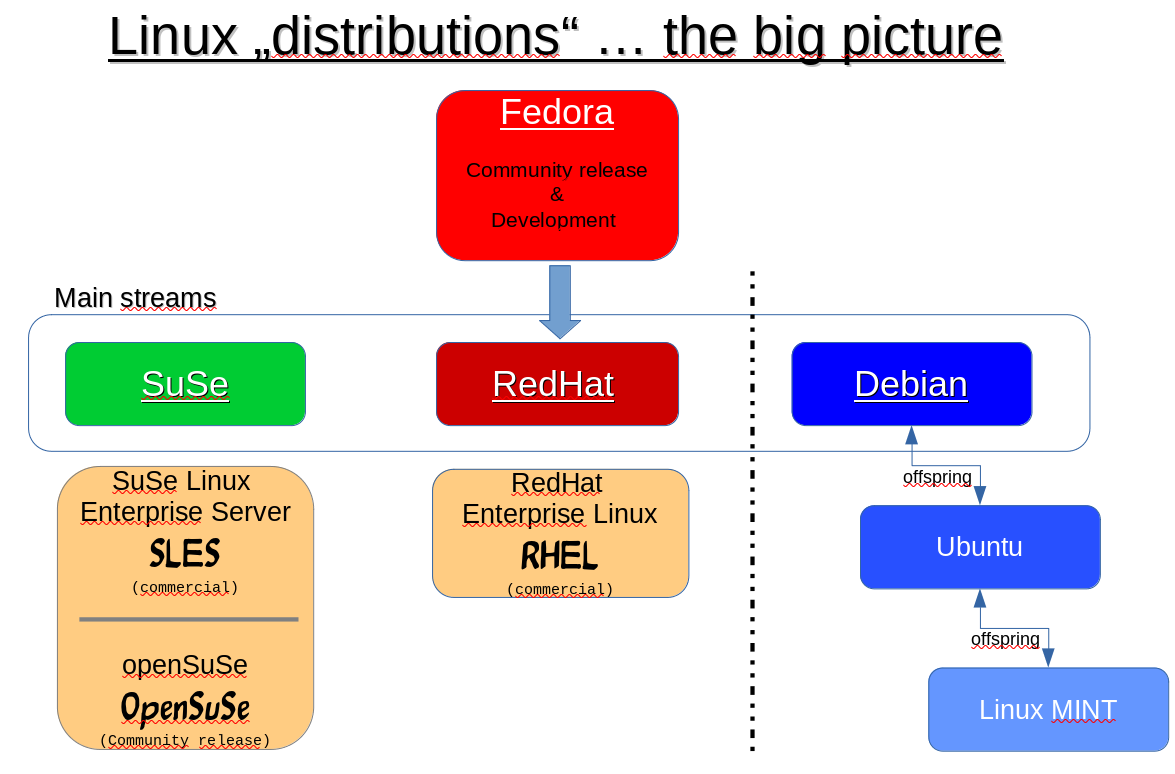 A distribution is focused on a specific audience. So a RHEL (RedHat Enterise Linux) is focusing on datacenter use and does provide very little desktop appications.

Unlike RHEL a company in the U.K. (Canonical Ltd.) wanted to attract former Windows users to their Linux distribution called UBUNTU. So UBUNTU came with tons of desktop applications.

A good overview of Linux-Distributions can be found on WIKIPEDIA and the article states, that there are about 1000 Linux distributions available nowadays ...

One of the most blatant myths about 'Linux'  is the claim, that there is no software for 'Linux'.

The facts speak a different language. The following list shows the packages, that are available for a particular distribution.

Until RedHat Linux 9 it was a community driven product - but RedHat was aiming towards being an 'enterprise grade' OS to be used in professional data center situations. But the 'global players' in the data center areas like IBM, SAP,  DELL, etc. denied their acceptance due to the short release cycle (2-3 times a year) and the lack of a profesional support infrastructure. All the global players were just unwilling to certify a new OS release every 4...6 months. That was the end of RedHat's ambition at first ...

RedHat has learned its lesson and decided to drop the community-release 'RedHat Linux' in favour of a new  product 'RedHat Enterprise Linux' (RHEL) with:

Armed with this basics RedHat Inc. found the acceptance from 'global players' and made its way to the first commercial Linux distribution on 22-Feb-2000 at an enterprise-grade level. Hence 'RedHat Enterprise Linux' was no longer a freely availalable distribution. It still was licensed by the GPL (General Public License) licensing scheme and was still 'Open Source' but customers had to pay a fee for each copy with an underlying support contract.

Unfortunately this has cut-off the former community release 'RedHat Linux' from the community and in particular from the developers. At this point the university of Hawaii jumped in, which has already provided the RedHat related 'Fedora Core' distribution so far. In collaboration with RedHat Inc. the university of Hawaii agreed to provide the Fedora distribution as the new community & developers release. So the Fedora distribution was born as the new RedHat community and developers release for the commercial RedHat Enterprise Linux (RHEL).

Available 'free of charge' community supported distributions of RHEL are:

SuSE Linux was a Linux distribution from Germany founded by some UNIX professionals and highly talented enthusiasts: e.g. Harald Milz (an editor at the German UNIX magazine "IX" has been CEO for a while in the early days of SuSE)

For details see their WEBsites: https://www.opensuse.org or https://www.suse.com for the commercial 'SuSE Linux Enterprise Server' (SLES)

Special for any SuSE distribution is, that a SuSE Linux comes with its SusE-specific system management tool 'YAST' (Yet Another System Tool). YAST runs in 'terminal mode' and helps beginners to conduct common system tasks by navigating through 'panels' with the cursor keys (Up/Down/Left/Right). This is very helpfull for server installation that are usually installed without a graphical desktop.
For managment of installed software SuSE has adopted the 'RedHat Package Manager' (RPM) and has given up of doing this job by YAST.

Debian ... (and its offsprings)

Debian is an entirely community driven Linux distribution maintained by IT amateurs and Linux enthusiasts.

It was founded in Aug-1993 by Ian Murdock and the first release came out 15-Sep-1996. Ian Murdock just named it after the first name of his spouse Debra.

Debian comes with its own 'software catalog system' called APT which is one of the most important specifics in Debian.

Debian is rather related to 'desktop users' that use the system in isolated environments; e.g. at home. As a result a lot of server related software is hopelessly outdated

Ubuntu is a direct offspring of Debian and is published by small company named "Canonical Ltd." with the headquarter in London/UK.

On one hand Ubuntu is aiming for making a desktop Linux that is as trivial as Windows to attract Windows users.

On the other hand Canonical claims Ubuntu to be 'enterprise grade'. At least Canonical offers payed support for Ubuntu and recently they have unleashed an "Ubuntu Server" rendition with a completely different installation concept. We will see in the future where this ends. Based on Debian I cannot see a bright future for an "Ubuntu Server" rendition ...

A standard Ubuntu has even implemented its own window manager called "Unity". Due to the woes with the Linux MINT community (see below) Canonical changed its mind and turned to the GNOME desktop manager. There is also an "Ubuntu-Mate" available and "Ubuntu-Studio" (related to 'creative users') comes with an XFCE desktop.

This is why 80% of Linux-newcomers choose Ubuntu and Ubuntu has by far the biggest user community behind it. But keep in mind that this does not mean, that Ubuntu is the best Linux distribution after all. Ubuntu is driven by a tremendous hype among Windows run-aways ...

As an 'offspring' of Debian, Ubuntu shares all the woes of Debian. But from my own experience I can say, that Ubuntu is the better Debian.

Some day in the past former Ubuntu users were pretty unhappy with Ubuntu's policy to favour it own window manager 'Unity' whilst denying to open up for other and far more powerful other desktop environments like GNOME, KDE and ... Cinnamon ...

At this point the MINT community was grown to provide an Ubuntu-based distribution with better integration of powerfull desktop environments. 'Linux Mint' favours the 'Cinnemon' desktop that has a pretty fancy design. But MINT is also open for other desktop environments like GNOME, KDE, MATE, XFCE etc.

And what about 'Fedora' ?

Fedora is the a community release & the development release of RedHat Enterprise Linux. As that -of course- it is a so-called 'rolling release' and by this nature does not provide a LTS (long-term support) for this distribuition.

As a development release Fedora is a distribution for:

Warning: Fedora is not a distribution meant for 'production use' and will definately overwhelm beginners!

On the other hand Fedora provides a full-fledged development area with newest tools, libraries, etc. and is years ahead, which is exactly what developers need and want, though.

Fedora is often badmouthed as the 'alpha-test' release of RHEL - but this is a blatant nonsense chiefly unleashed by Debian folks. The alpha-test of Fedora is 'Fedora-rawhide' which is of course the 'bleeding-edge' edition of the running development for exclusive use by hard-core developers & maintainers and anyone else is strongly discouraged from using it.

Since Fedora is also a 'community edition' it has a pretty good stability for use by 'home users' and of course the developers. Fedora is by that rather a consolidation rendition and as this it provides the basis for the next master release of RedHat Enterprise Linux every  5 years (10 Fedora stages).

As Fedora is strongly related to RedHat it shares many of the professional methods that were established by RedHat.

Linux and the desktops ...

With Microsoft Windows your 'Window Manager' is 'Windows' ... there is no other choice ...

This isn't so with Linux distributions. Every Linux distribution provides a variety of several Window-Managers ('desktop environments') although most distributions feature a particular Window Manager (WM).
Just to name the most important/popular window managers for Linux:

For beginners with a Linux distribution the choice of so many different window managers is bewildering.

Linux and the internet browsers ...

Linux distributions have gone through a real variety of Internet browser since the beginings. There are dozents of them although Firefox (evolved from NetScape/Mozilla) is the most popular and the standard browser across all Linux distributions.

But there are a couple of others.

Each has its benefits and flaws. Some of them are feature-rich & modular whilst others are made to 'browse only' with a small footprint in memory consumtion.

Anyway, Firefox is available with all distributions as it is known from a Windows platform where Firefox is also available.

This system uses cookies, since it is essential to operate an online-shop. I am aware that cookies will store notes on my computer about the contact with the visited WEB site and I accept this.
Accepted Denied