OpenVPN is available for:

Here I provide a showcase and concept for a bunch of static (persistent) VPN tunnels between a rented 'root server' in a data center and several client systems spread across the country.

Since I don't have Windows & MacOS clients at hand the client installation & configuration section only shows the procedures for Linux clients.

The scenario shown here is using static/persistent/dedicated VPN tunnels. The benefit from static (persistent/dedicated) VPN tunnels with openVPN is, that it does not need any PKI (Private Key Infrastructure). So the configuration is essentially easy, since no PKI must be maintained to get things up and running.

In a static tunnel VPN tunnel environment the server has just to generate a 'static key' for the connection that must be transfered (copied with ssh, scp or otherwise secure way) down to the client system to be integrated with the client setup - that's it.

Architecture of the explained scenario: 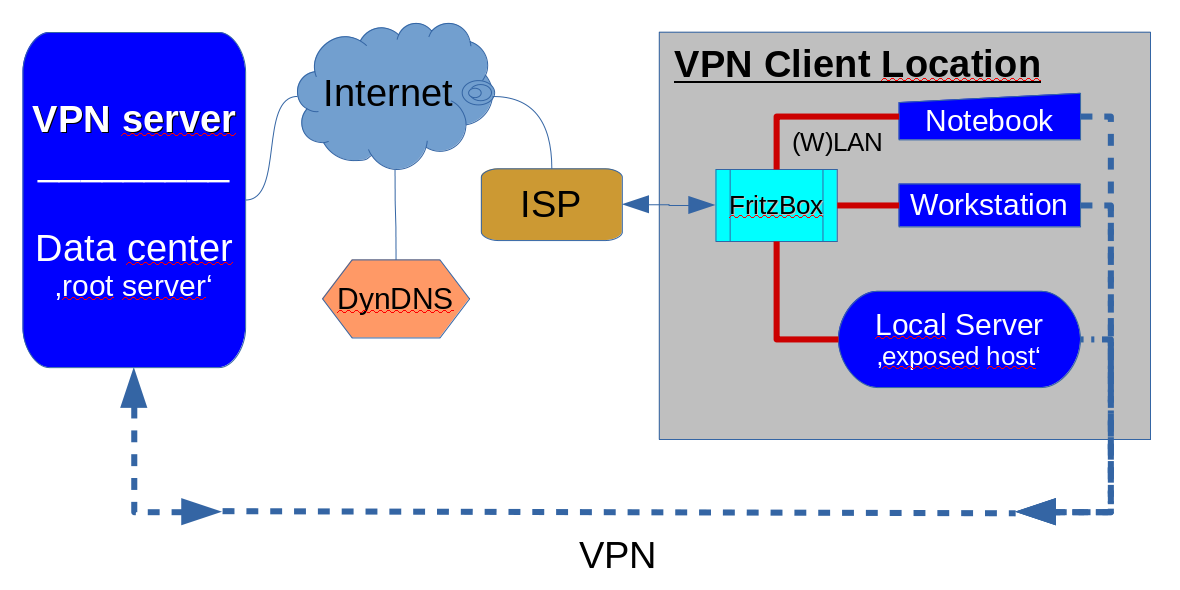 Step1: Preparing and configuring the server ...

You must be 'super user' (root) for the installation and configuration tasks to be conducted.

Install openvpn on the server and go to the management directory /etc/openvpn/...

OpenVPN is very versatile and provides measures for many 'scenarios'. So it is important to keep things clear for the purpose and the chosen scenario.

Conditions for this example

First of all a decision must be made which network to be used for the VPN. In this example the choice is the '10.0.0.0/8' network, since it offers the most flexible use for the purpose.

For the purpose the address was structured as follows:

Since a static tunnel is a point-to-point connection the netmask will be automatically set to "255.255.255.255" (/32) by openvpn when the connection is established.

The standard port for the openVPN service is '1194' which is left alone.

(no 'tunnel0', since '0' is not really an ordinal number - just to keep things easy)

If this is not enough for you, you may have a look at /etc/services and it turns out, that infact the entire port range from 11900...11966 is not used. So you may use a tunnel nomenclature with 2-digit tunnel numbers as follows:

This gets you a range of 66 static/persistent tunnels - and if you can ignore the assigned port from 11967..11999 you may even extend the range to 99 tunnels that are possible with 2-digit tunnel numbers.

In the sample concept I stick to 1-digit tunnel numbers to keep things easy.

Modify your /etc/services file as shown below:

By providing these service numbers in /etc/services you get decent information in the output from network tools like 'route', 'ifconfig', 'lsof' etc.

Some entries in the servers /etc/hosts cannot hurt either ...

Define static tunnels in /etc/openvpn/... on the server

Create definitions for the static tunnels in /etc/openvpn/... as you need them as follows:

Then replace the red numbers inside the particular tunnel configuration file accordingly.

The instructions below are for 'iptables' on CentOS-7 configured in /etc/sysconfig/iptables. On other systems the path for the 'iptables' start-up file may differ a little.

Add this to the '*nat' section (before the 'COMMIT') of the basic firewall configuration on your system:

If your 'outbound' network interface is other than 'eth0' change this as well.

Add this to the '*filter' section in the iptables basic configuration:

Establish a service start-up script (here: traditional SysV-style) in /etc/init.d with the name 'tunnel'. For instance:

Note: the startup-script works for 'single digit' tunnel numbers, if more than 9 static tunnels are needed:

To have the tunnels established on system start-up or reboot the service init script must be enabled finally:

After running the service script (with 'service tunnel start' ... or ... '/etc/init.d/tunnel start') the tunnels configured in /etc/openvpn/... should line-up in your network interface configuration:

To check whether the UDP sockets are established you can check with the 'lsof' command:

With this step the VPN server configuration is finished.

Tweaking a 'FritzBox' or other (W)LAN router (client side)

At the moment you can 'ping' your FritzBox/(W)LAN router by the domain name that you have got from the DynDNS provider you may continue. Otherwise it makes no sense at all.

With a work-station, a notebook and a local office server in a client location that are all getting their private static VPN tunnel there should be 3 separate 'Port-Freigaben' under "Internet -> Freigaben"; lets say for example the ports 11941, 11942 & 11943 are to be used in one location. You may configure these 3 "Freigaben" with the labels:

Take care that port numbers in one location do not intercept with assiged port numbers in other locations to avoid any access conflicts on the server side! The connection labels in separate FritzBoxes may repeat across the VPN with static/persistent  tunnels - but not the port numbers.

If everythng is fine with your DynDns setups and port assignments in the locations you may continue with the actual client setups.

To install and configure the client you must be administrator/super-user as well.

Download and install the OpenVPN package for your particular client system. On Linux systems you can install 'openvpn' with 'dnf', 'yum', 'apt', etc. from the distribution repository.

The client setup is a lot easier than the setup for the the server, since only one 'tunnel.conf' is needed in the openvpn configuration directory.

I recommend to create a sub-directory below /etc/openvpn/... to keep the static client configuration:

Then create the configuration file for the client tunnel as 'tunnel.conf'.

Assumed is that tunnel #1 is used for this client setup in this example. On other clients the port number must differ as well as the tunnel number part in the IP address.

Note, that the IP address of the client comes first in the ifconfig statement followed by the server's VPN IP address!

The last missing thing for setup is the key for the connection specified in the 'secret static.key' statement. In this example it is assumed, that all clients share the same encryption key. So all clients can just copy the same the 'static.key' file from the server in the server's /etc/openvpn directory.

To get things going just copy this key file into the directory where your 'tunnel.conf' files resides. You are currently super-user (root) for the installation task anyway. So you may copy the key file from the server with:

into the current directory. (/etc/openvpn/client/static)

Last but not least the client also needs a service startup script in order to connect with the VPN server autimatically after system startup and reboot.

Drop the following code into a file in /etc/init.d as file name 'tunnel'

Make the script 'executable' and finally enable  the service script to be executed at system startup & reboot:

Now everything is configured that it can be started for a successful connection.

Check with 'ifconfig' that the tunnel device got established:

If eveything went fine so far now a ping to the server (destination address) from the client side should succeed.

Login into the server and `ping'ing the client IP for this tunnel the client should respond to the ping from the server side as well.

Like on the server the client should have entries to:

where X is the tunnel number that the server provides for this static tunnel to this particular client.

To address the VPN server 'by name' kind of a  DNS resolution should be configured. The simple/easy way
is by entries in /etc/hosts.

where X is the tunnel number that the server provides for this static tunnel to this particular client.

This way you may connect to the VPN server by simply using the configured name;
e.g. 'ping vpn'

This finishes the VPN client configuration

Checking on the server ...

... shows the established tunnels on the server

... shows the TCP proccesses running across a tunnel.
Here:

Checking on the corresponding client ...

Where to go from here?

In this example things were kept simple for clarity.

But going beyond all the restrictions in this example things can be worked out to tremendous sizes.

Giving up the simplicity in the network adressing the theoretical number of static tunnels can be increased to 256 tunnel sections with 127 configurable static tunnels which makes up a total of 32512 tunnels (theoretically). For such a range it turns out to be very hard to find enough space in the /etc/services file to label the exclusive port numbers. Not to speak of the new sizing of the underlying server hardware ...

Anyway. The concepts in the  example hopefully showed how to easily build up a VPN infrastructure with static/exclusive/dedicated/persistent  VPN tunnels for use with 'home office' situations or 'local office servers'  in small branches to connect with a central server.

If you have questions, ideas, wishes, success stories or other thoughts, then drop us a message here ...